Who was the first structural engineer? It could have been the first human who broke tree branches to a needed length, then lashed them together with vines to create a shelter.

Since that time, our structures have become larger, more complex and durable, and have used a growing range of materials. Along the way, structural engineers learned the capabilities of those materials and how the form and shape can make them stronger or more durable.

Wikipedia describes structural engineering as designing the “bones and muscles that create the form and shape of man-made structures.” Structural engineers work as part of an integrated team alongside architects, civil engineers, construction managers and contractors.

Structural engineering is involved in the design, construction and maintenance of the built environment: buildings, roads, bridges, canals, dams, sewage systems, pipelines, railways, seaports and airports, and more. Structural engineers are also important to the design and building of machinery, appliances, airplanes, automobiles, boats and things as complex as spaceships and space stations.

Structural engineering is even a part of the design and production of smaller built things like computer keyboards, electric shavers and doors.

The ultimate goal of structural engineering is to design structures, including buildings, bridges and also machinery, that can withstand the stress of their surrounding environment, as well as the stresses that come from their use. To put it simply, it’s the structural engineer’s job to make sure that built structures don’t collapse.

For example, a house in the Wasatch Range has to be able to bear the weight of heavy snow on its roof. A stadium in southern California must be able to withstand an earthquake. Bridges must be able to withstand stresses of wind and water, as well as the traffic volume over their road surface. Structural engineers must also take into account factors such as erosion of the terrain on which their structures are built, and wear over time of the structures themselves.

Machinery must be able to withstand the stresses of their use, moving parts, loads of content and more.

The elements of structural engineering

Every structure, whether a house, factory, bridge or seaport, is made up of a number of smaller elements. In a building, for example, these include:

These are the basic elements of architecture and design of shapes and structures, arranged in different configurations to achieve the goals of the project.

The job of the structural engineer

The structural engineering team remains integral to the building project through its lifecycle, from inception through construction and then maintenance of the finished project. This includes: 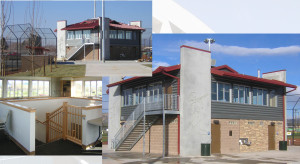 Structural engineering is one of the core services offered by McNeil Engineering. We’re proud of some of the innovative solutions we have developed for our clients’ projects.

For example, the owners of the Ashley Valley Ballpark in Vernal, Utah, wanted a new two-story announcing booth and concession stand that featured precast concrete panels bearing engraved sports images at the four corners. We used reinforced masonry main floor walls, a plywood web I-joist floor system, and a prefabricated truss roof system to support the weight and lateral loads. At the same time, the design had to provide seismic, or earthquake, resistance to significant shaking. Uniting these different construction systems together was another challenge, along with providing sufficient space for duct work and mechanical systems, while maximizing window space for the second-story announcing booth.

The Rush Street Restaurant in Los Angeles, Calif., is the conversion of a 75 year-old sign and welding shop. No records of the structure’s original design or documents were available.

McNeil’s engineering team started with a thorough investigation of the site, analysis of the building’s structural elements, and seismic structural analysis to bring it into current, strict provisions of the California and LA City building codes.

The project became more complex with the client’s desire for an added mezzanine level, along with a limited budget.

The result? A thriving, modern restaurant in a bustling neighborhood.