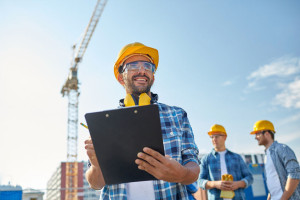 You may be looking at buildings and homes today and think they haven’t changed much, but they’ve actually changed quite a lot over the years. Just go back even a hundred years and you will how much modern home and commercial building design have changed.

First, consider how much bigger buildings are today. The buildings echoed a Greek architectural style and had above-ground foundations with little-to-no reinforcements. Interiors were generally less than 1,000 square feet and rarely had a second or third floor. It wasn’t until after the Second World War that building processes began to undergo a major shift. The need for cheaper, more standardized materials came to the forefront and building became much more efficient. From insulation to other modern building techniques, a big shift changed the way construction was done.

Usually, you had a crew working on site and they would build a structure from the ground up. Today, you may work with prefabricated materials and structures built off-site and then transferred to the job site. Prefab building is designed for efficiency and affordability. Construction crews can repeat a simple process each time and finish jobs quicker and for less money. Companies and builders switched to this method of building to cut costs and introduce mass production to the construction process.

Predesigned structures are still used today. And it isn’t because they are cheap. They are also very flexible. Homeowners can customize a prefab home according to their specific design ideas. Commercial builders can also spec their structures using prefab materials. This saves the builders and the construction companies both time and money.

Building materials have also undergone rapid evolution once they became standardized and could be ordered in bulk. From cinder blocks to lumbar materials, a certain set of materials soon became the norm. And this paradigm has lasted until today, with lumbar being mass-produced in standard sizes, using everything from fir to spruce and pine.

Materials have also become safer. Remember asbestos? Fortunately, industry changes when health hazards become apparent. Although asbestos was a mass-produced and cheap material, it caused a lot of illnesses in construction workers and other people. For these reasons (and others), it was ultimately phased out and is no longer used in modern construction.

Even things like green roofs are common. Did you ever think we would see a day when people and businesses would have full gardens on their roofs? Today, that is a lot more common than you think.

One of the biggest advances in technology has been the move to digital. Everything now lives in the “cloud.” And the construction industry has followed this trend. Modern computing allows for greater efficiencies. It allows architects, builders and designers to work digitally instead of dealing with pen, paper, and lost records. Creating and sharing designs has become so easy that it can be done with a simple click or tap of a button. This helps construction teams and engineers visualize concepts and understand a build before it even gets started.

Record-keeping has also become much easier, with file sharing and remote file access now commonplace. No matter where you are in the world, it’s very likely the construction job you are doing requires permitting and paperwork to get off the ground. Storing these items in a digital space keeps them safe and easily accessible.

At McNeil Engineering, we have been operating at the cutting edge of construction, engineering, and design for a long time. Do you have a job that requires an experienced and professional engineering team? Whether it’s for civil engineering, structural engineering, landscape architecture, or otherwise, we’ve got your back. Contact us today to learn how we can level up your next big construction project: (801) 225-7700