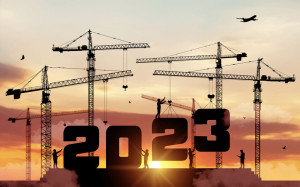 It’s no secret that 2022 has been a complicated year. The construction sector has seen some serious highs and lows as the lingering effects of the COVID-19 pandemic linger. Add in soaring inflation, big infrastructure spending, and a hot job market and it truly is a confusing environment for civil engineering firms in Utah. The question now is, what will 2023 bring? Let’s take a moment in today’s blog post to find the answer.

Here is how construction spending in six sectors is going to look. Expect manufacturing, highways, transportation, multifamily housing, lodging, and communications to expand by at least 5% next year. Another four other sectors, which include healthcare, public safety, education, and commercial, are expected to grow by zero to 4%. And there will be a slight decline in construction spending for single-family housing, power, improvements, and office buildings.

Finally, let’s take a local look. Utah added some 50,600 new jobs over the past 12 months, a 3.1% increase, with the numbers in fast-growing Washington County and the rest of southwestern Utah closer to 4%, according to a new report from the state Department of Workforce Services. And what was the fastest-growing sector in Utah over the past year? Construction, which added 15,100 new jobs. Utah continues to be one of the best-performing economies in the United States.

Meanwhile, across the pond, analysts are a lot more pessimistic about the European construction outlook. According to one reading from a European construction research group Construction output growth across Europe will drop to 0.2% in 2023 and drop even further to flat in 2024, with the reason being the ongoing war in Ukraine. But Europe is also grappling with rising interest rates, inflation, and material shortages.

Many analysts expect this to be a rough period of adjustment for the construction sector. Why? Because nearly all factors that affect construction demand are trending negatively in the Eurozone. These include the economy, consumer prices, interest rates, and consumer confidence. Specifically in Europe, demand for civil engineering has been lifted by big public and private investments in low-carbon energy and transport schemes. Still, the prospects for residential output drag down the overall outlook for the sector. And unlike the United States, Europe is not rolling out huge infrastructure investments across the board to its member countries.

It was only as recently as early summer that many were expecting a 2.2% growth in GDP in the Eurozone, even taking the war in Ukraine into account. Those estimates have been revised down to as little as 0.5%. Fortunately, the civil engineering outlook in Europe looks positive as many countries invest in low-carbon energy and renovate existing infrastructure, albeit with projects small in scope than those in the United States.

It is also important to consider that the huge decline in activity for fall 2023 is a sharp downward revision from -0.4% in even the worst scenario included in the U.K.’s CPA Summer Construction Forecast. Why? Mainly due to the impact of a wider economic recession, exacerbated by the effect of the ‘Mini Budget,’ and the consequent fallout from recent political uncertainty. With the U.K. having set a record for the shortest term for a prime minister in recorded history, lots of important projects have been either shelved or delayed.

The fact is there is still much uncertainty around the United Kingdom’s economy. There are still many factors that will adversely affect the construction forecast within the country. These factors include falls in real wages and potential further rises in interest rates, which will likely lead to further falls in consumer spending decisions.

On top of these issues, the wider uncertainty around the UK economy means that demand for private housing new build and private housing repair, maintenance, and improvement, is expected to fall. But what about commercial builds? Other key construction sectors such as commercial and infrastructure are also expected to be adversely impacted by valid worries about construction cost inflation. Rising prices are sure to negatively impact and possibly directly hinder project viability.

So, with that update on the U.S. and European construction outlook, 2023 appears to be a year of contraction, although more in some places than others. Here at McNeil Engineering, we are ready to serve our clients with top-level civil engineering services on construction projects in Utah and beyond. Contact us today to schedule a consultation.